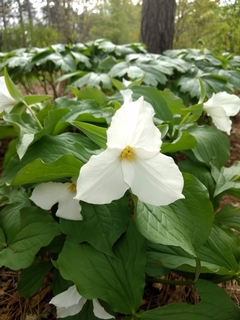 As it turns out, any native earthworm species were killed off during the last Ice Age. All of the current worms in Wisconsin (over 15 species have been identified!) are nonnative.  They originated in Europe and spread across this region as roads were built and farms were established.

Earthworms are just fine for your garden plants and farm fields, but the worms are harmful to native forests and wildflowers.  These environments developed in the absence of worms, so native plant species, like the trillium pictured here, are poorly equipped to grow and reproduce in soils altered by earthworm activity.  A decline in native plants also negatively impacts fungi and animals dependent on those plants, so earthworms can dramatically alter the composition of a forest.

This doesn’t mean that you need to dig up your backyard to remove all the earthworms, though, since they’re clearly here to stay.  However, you can do your part to protect Wisconsin’s wildflowers by putting unused fishing bait in the trash instead of dumping it outdoors, preventing introduction of worms into new areas when you transport plants or soil, and spreading the word that earthworms are actually invasive!